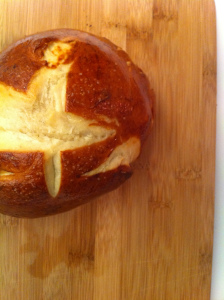 This is the time of year where I go from class to work then studying then bed EVERYDAY so cooking gets put on the back burner (it’ll be over next week which means Christmas cookies galore will be happening after). Anyways, so I decided to make some yummy soup to get me through the week. Although I can sustain myself off of the same soup for 4 days straights, my boyfriend seems to get cranky at the idea so I told him to just whip up some bread in the bread maker if he was so upset about it.

In turn, this amazing pretzel bread was created. He ended up not using the bread maker to make the dough and it still turned out fantastic. He had the dough all ready to go when I got home from work Monday and we were able to whip up the rest in less than a half an hour. Psh, no biggie. I love the fact that we’ve discovered how simple and easy making homemade bread really is. Damn, it’s so gooooood all the time.

Anyways, so we made two small loaves with this recipe. It was perfect because we ate one immediately and saved the other for dinner the next day which was still soft and yummy. Next time I think I’m going to make smaller buns out of them and just reduce the cooking time because these guys would have been perfect to eat by themselves on the go or save leftovers for grilled cheese.

First prepare the dough an hour and a half ahead of time so it can rise! Whisk together yeast, milk, water, 3 Tablespoons butter and brown sugar until well combined. Let mixture sit for about ten minutes so that yeast can activate. Next, add in the salt then slowly start adding in the bread flour until a sticky but formable (should be able to make a ball out of it. if not, then its TOO sticky and add more flour) and shape into a ball. Grease a bowl and put the dough in it to rise; cover for 30 and minutes and then knead by hand for about 10 minutes. Recover in bowl and let rise for about 45 minutes.

Now finally the fun part! Preheat oven to 400 and bring the 3 quarts of water to a boil. Once bowling, add the baking soda slowly until well combined (I say slowly because it could make the water boil over otherwise and no one wants a baking soda mess on their hands).

Split the dough into two (or three or five or whatever amount you’d like!) and shape into balls. Place in the boiling water for 30 seconds then remove onto a greased baking sheet. Repeat with the other balls of dough.

Melt the other two tablespoons of butter in a small bowl. Cut slits in the top of the dough so that it can expand and brush with the melted butter. Sprinkle with salt and bake for 22 minutes (rotate the baking sheet once during baking).

And then munch down real hard with soup or with a dip. Be careful to save some for your friends or keep away from drunk roommates who may devour the whole thing before you get the chance to.