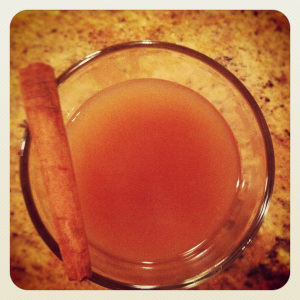 ALL/ Drinks/ Side/ Snack/ Sweets/ Vegan

Woah, where to begin? It’s been over two weeks since my last post but I promise I have good excuses for this. First off, I spent my Thanksgiving vacation in the mountains in Colorado with my Ma’s side of the family. And although living on the side of a mountain in a mansion of a log cabin is perfect for skiing and sledding and getting drunk off of bloody marys…it’s not the type of place where I’d have internet connection….. sooooo no posting for me that week.

But, while we are on the topic, I got some awesome pictures of the long weekend!

We decided to drive which meant that those 36 hours of car time was bound to ignite a roadtrip-esc experience of stopping at every road side attraction possible.

I didn’t really have the patience or internal heat for skiing (although we did try it one day! But that just ended in us spending 80 percent of the time in the lodge at the bottom getting tipsy). We did go tubing on top of a mountain at Keystone the Sunday we were there (pictured above) and it was so much fun. I promise my brother is not as mean (well…mostly) as he looks in this picture.

So where am I going with this lengthy and wordy post? Well, on our 36 hour car ride endevour, we made it a point to stop at as many Goodwills along the way as possible (we are vintage shopping horders. Serious problem, we know). And while at a small Goodwill in Middle-of-nowhere, Kansas I came across a Betty Crocker Deluxe cookbook set. I mean this thing is legendary, it was published in 1969 and has 4 separate cookbooks that fit perfectly into a boxset with Betty Crocker’s face (or at least what they decided she should look like if she was to really exist) painted across the front (don’t worry- I’ll include a picture of it later!). Anyhow, this boxset got me to thinking that the places I look for recipes are all quite similar and I need to start experimenting with other sources. So I’ve decided that every so often I’m going to do a retro recipe where I adapt one of the original Betty Crocker recipes from this deluxe set into a revamped, modern vegetarian dish! Don’t worry, there are alot of recipes in this book that went out of style for a reason (cactus juice=milk and green food coloring. wwaaaah?) so I’ll try to stick to appetizing oldies.

This recipe I made while we were staying in the cabin. What I did was make it alcohol free for all the kiddies but keep the whiskey close for people who wanted to add it to their serving. 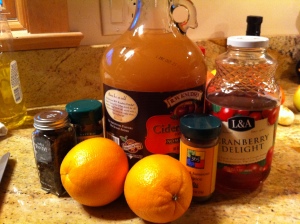 Stick the cloves into the orange skins like shown. 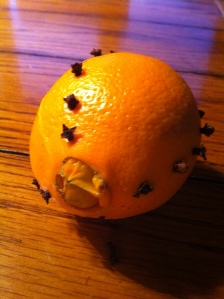 Then add everything to a big pot and let simmer for an hour! This will mend the flavors all together to create a warm and crisp flavor!

Serve with whiskey or cinnamon sticks. Boom. that’s it.