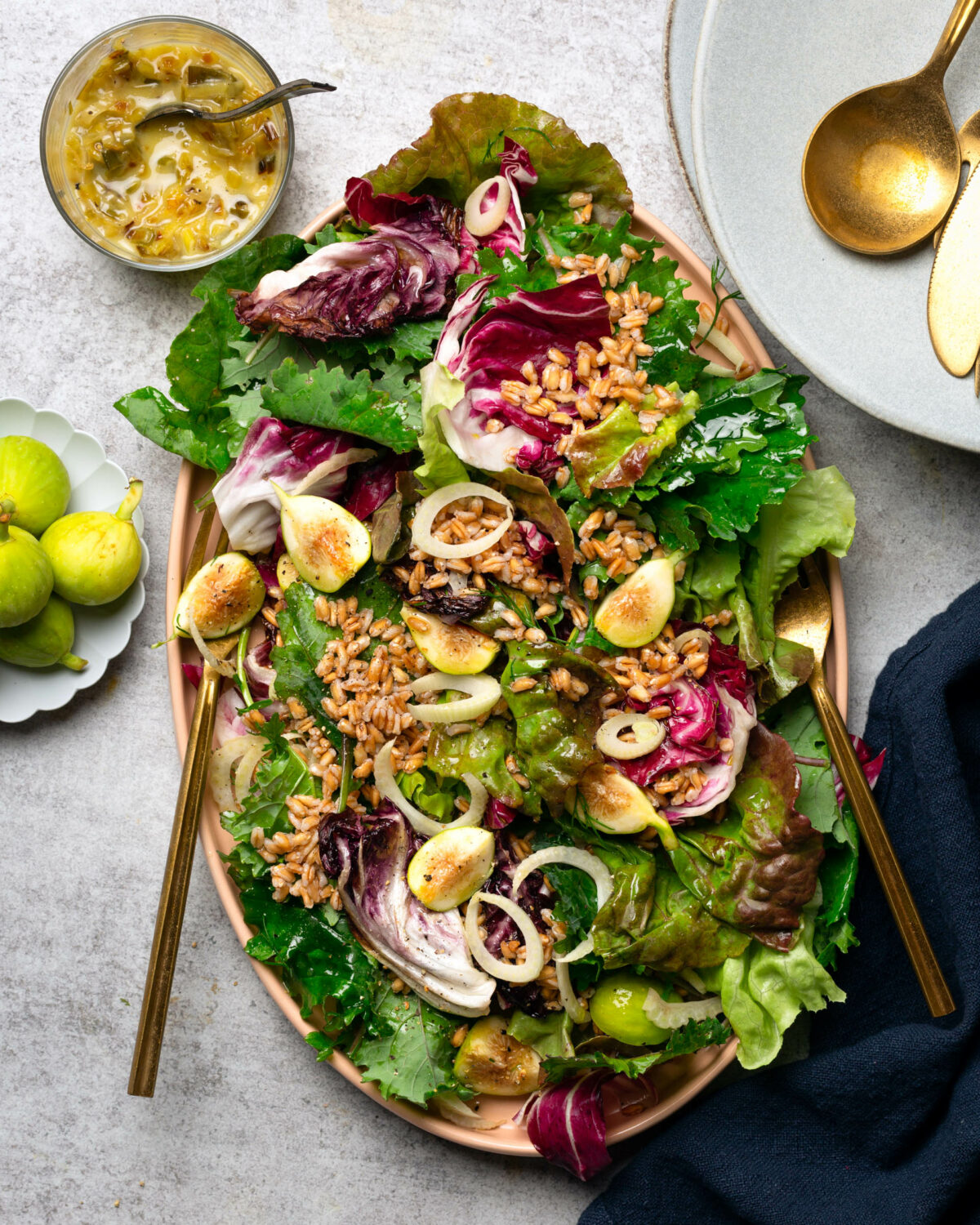 ALL/ Fall/ Salad/ Sauce/ Side/ Thanksgiving

This Farro & Radicchio Salad with Caramelized Leek Dressing is a vibrant and hearty salad perfect for fall and winter when you are craving some veggies but want something substantial that will keep you full on chilly days.

Here we goooo – the first fall recipe of the year is finally here! I know some of you were ready as soon as the calendar entered September but it’s still muggy and hot here so I just couldn’t bring myself to give up the tomatoes and corn until this week. It’s very appropriate that I’m starting the season off with a hearty salad recipe because it’s still warm enough to crave a salad but this recipe also highlights some cooler weather ingredients. I also love using grains and heartier leafy greens (like radicchio) to create a sturdy salad that will hold up for a few days.

To streamline this recipe, I’d recommend starting with the dressing since the leeks take about 30 minutes (maybe a little more depending on how large you cut them) to caramelize. If short on time, you could also caramelize the leeks and cook the farro ahead of time which then makes assembling this salad a quick breeze when it’s time to eat.

I’ve had a few of you comment when I’ve posted recipes highlighting radicchio in the past that the radicchio is a little bitter for your tastebuds. Because of this, I decided to experiment by roasting half of the radicchio to mellow it out and kept the other half raw so there was still substantial crunch (you’ll notice in the photos that there are a few leaves that are dark and crispy which were roasted). Ultimately, I decided I love the texture of raw radicchio and the bitterness that counters the sweet figs so I’ve written the recipe that way BUT if you’d like to tone the bitterness down, all you have to do is brush the radicchio leaves with a little olive oil and roast in a 500 degree oven for 5 minutes or so (watch closely and remove once the leaves start to brown on the edges).

The last note I have for this recipe is that I used some beautiful fresh figs I found but I realize their season can be short and they are not always available at all stores. If you are having trouble finding them, feel free to substitute with 1/4 cup of either dried cranberries or yellow raisins – this will still bring a touch of sweetness to your salad that will counter the bitterness of the greens beautifully. 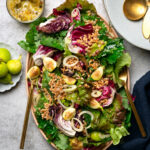 This Farro & Radicchio Salad with Caramelized Leek Dressing is a vibrant and hearty salad perfect for fall and winter when you are craving some veggies but want something substantial that will keep you full on chilly days.

Make sure to tag Vegetarian ‘Ventures on Instagram and use #vegetarianventures when trying this dish out!