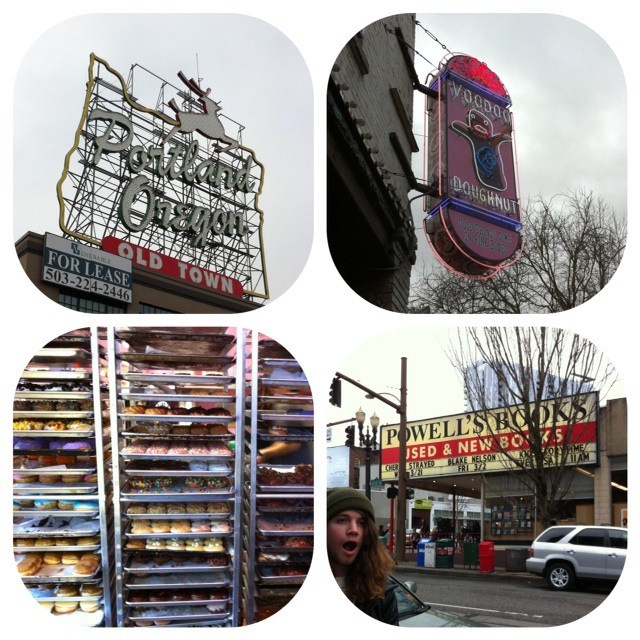 Our other “official” destination on this adventure was Portland; it was just as beautiful as I’d been imagining it. I absolutely loved Portland (I’m sure it did not help that it rained the whole time we were in Seattle and the moment we got here the sun came out). The food was phenomenal and the atmosphere artistic.

Here are a couple highlights: Powell books where we both managed to spent far too much money (and time- we spendtwo hours in this place and didn’t even scratch the surface) on zines, cookbooks, DIY tutorials, and journals. Ahh, I was so in love! And the other pictures are from Voodoo donuts which was (as you can imagine) a sight in itself.

Right when we got off the plane on Friday morning, we directly drove to this place. We had planned to head to Seattle for the first leg of our journey but Wyatt insisted on getting some yummy breakfast before we began our journey. We stopped at this tiny cafe because we saw Guy from ‘Diner, Drives, and Dives’ (sigh- I despise Guy and am not sure why we were watching his show) called ‘Pine State Biscuits’. It. was. so. delicious. This place was so small that most people had to stand while they ate and there was a line by the time we left. I had the mushroom gravy on top of my biscuit and every bite melted in my mouth. It did not take me long to realize that Portland has really really perfected the vegetarian gravy.

The night we got into town we went out for drinks and dinner with some of Wyatt’s old friends who moved out there the previous year. They lived in the Sunnyside neighborhood and its filled with bars, cafes,and vintage homes. We started out at a small bar that had amazing vegan sandwiches and local beer…sadly I had one too many of the local brews and can’t remember what the place was called. The other place we went to was a very upscale bar which we got a ‘flight’ to sample some higher end local gin, whiskey, and rum [this was also particularly fun because we hardly ever try upscale liquor].

The next morning we decided to all go out for a hang over brunch at a place that is known for their Bloody Mary’s- The Cricket (because what cures a hangover more than drinking more?). Top left is my citrus Bloody Mary, the right is Austin with his coffee-rum drink, the bottom left is Allison with her Bloody Mary (she got the same one as me but they have a dozen different kinds to choose from), and the bottom right was Wyatt’s raspberry beer mimosa.

I realize that food pictures taken by a iphones are never appetizing but I had to post this picture to show how intense this omelet was that we got. Not only was it made with four eggs but it was STUFFED with hash browns and veggie sauce then lathered in mushroom gravy! Ahhh, best breakfast food ever. Needless to say, Wyatt and I split the omelet.

Voodoo Donut. I (top) got a vegan orea donut that was topped with vegan oreos and peanut butter. Wyatt (bottom) got a voodoo shaped donut with raspberry filling. [PS I apologize for my expression on my face. For some reason, I seem to have forgot how to smile]

Here is another picture that is not very appealing but this place was sooooooo cooooool. It was a Vegan Grocery Store! That is right…nothing in this store was made with any animal product. This concept blowsss me away! If I lived in Portland, I would never have an excuse to not have the resources to be vegan again. Also, the store next door was called ‘Herbivore’ and it was a ‘cruelty free’ boutique filled with animal free products like shirts, zines, and knick-knacks.

Lastly, we ended our day at a small park which was at the top of a small mountain (well a mountain compared to what we have in the Midwest- probably just a big hill for most people) and it looked out over the city. So beautiful. We walked the paths for about an hour and it was so refreshing to feel the fresh air and see so many people positive about being outside and enjoying a beautiful February day.