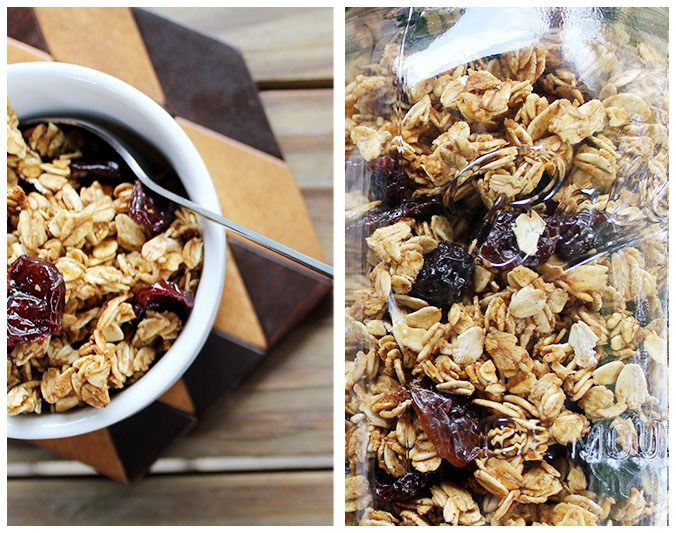 ALL/ Breakfast/ Side/ Snack/ Sweets/ Vegan

And so we continue our fall theme with another pumpkin recipe! And weirdly enough…another breakfast recipe! [ Not that you can’t also eat granola for a dessert or as a snack or just because it taste good ]. Although we all wish that we could eat cinnamon rolls for breakfast everyday, it’s probably not the healthiest choice imaginable. I would probably find it hard to get up and do yoga every morning if I had just downed 3 cinnamon rolls for the third time that week. Anyhow, what I am getting at is today’s post is about a more of a….sustainable breakfast choice. Think of cinnamon rolls as your weekend breakfast and this granola can be your simple and quick weekday indulgence. Throw some Greek yogurt // almond milk // soy yogurt in a to-go cup and top it with this granola + maybe some honey // agave or sliced apples as you run out of the door [ oh, and don’t forget to bring a spoon! ].

So, on that note, I have a confession. I LOVE parfaits and went through a big phase where I would whip them up for dessert [ as an attempt to avoid getting the ‘I should make brownies because I’m craving sweet’ thought that often follows dinner ]. However, I always bought granola from the store and this is my first attempt ever at making it myself. Damn, I am kicking myself now! Reasons why this should have been on my radar years ago:

1. It’s stupidly cheap to make your own! For 5 cups of organic rolled oats, it cost me 2.19 to get from my bulk section. Yeah! Do you have any idea how much 5 cups of oats it!? It’s a lot. Goodbye $4.69 box of organic Cascade Farm’s granola! You will never fool me again.

2. It’s SO SO SO easy to make. I throw all the ingredients together in 5 minutes and then did my entire morning yoga routine while they cooked. This meant…I had to wake up maybe 10 minutes earlier than I usually do. And then you have enough granola to last for twice as long as those skimpy pre-packaged boxes of cereal do.

3. You know exactly what is going into your granola. None of that hidden corn syrup or extra dose of sugar that you always pretended was not in there. And it also gives you total control! Don’t like your granola sweet? Cut back on brown sugar! Don’t like dried cranberries? Swap out for dried cherries! So easy!
Anyhow, I hope that I’ve inspired you and that this recipe gives you that extra push to try out making your own granola!

Adapted from Two Peas & A Pod

Preheat oven to 325 degrees and line a baking sheet with parchment paper.

Cook for 40 minutes (stir the oats around halfway through cooking time). Remove from oven and let cool slightly. Fold in dried cherries.

Let cool completely (this will help crisp it up!) and then sprinkle over yogurt//milk//whatever you are feeling.

Store in an airtight container.