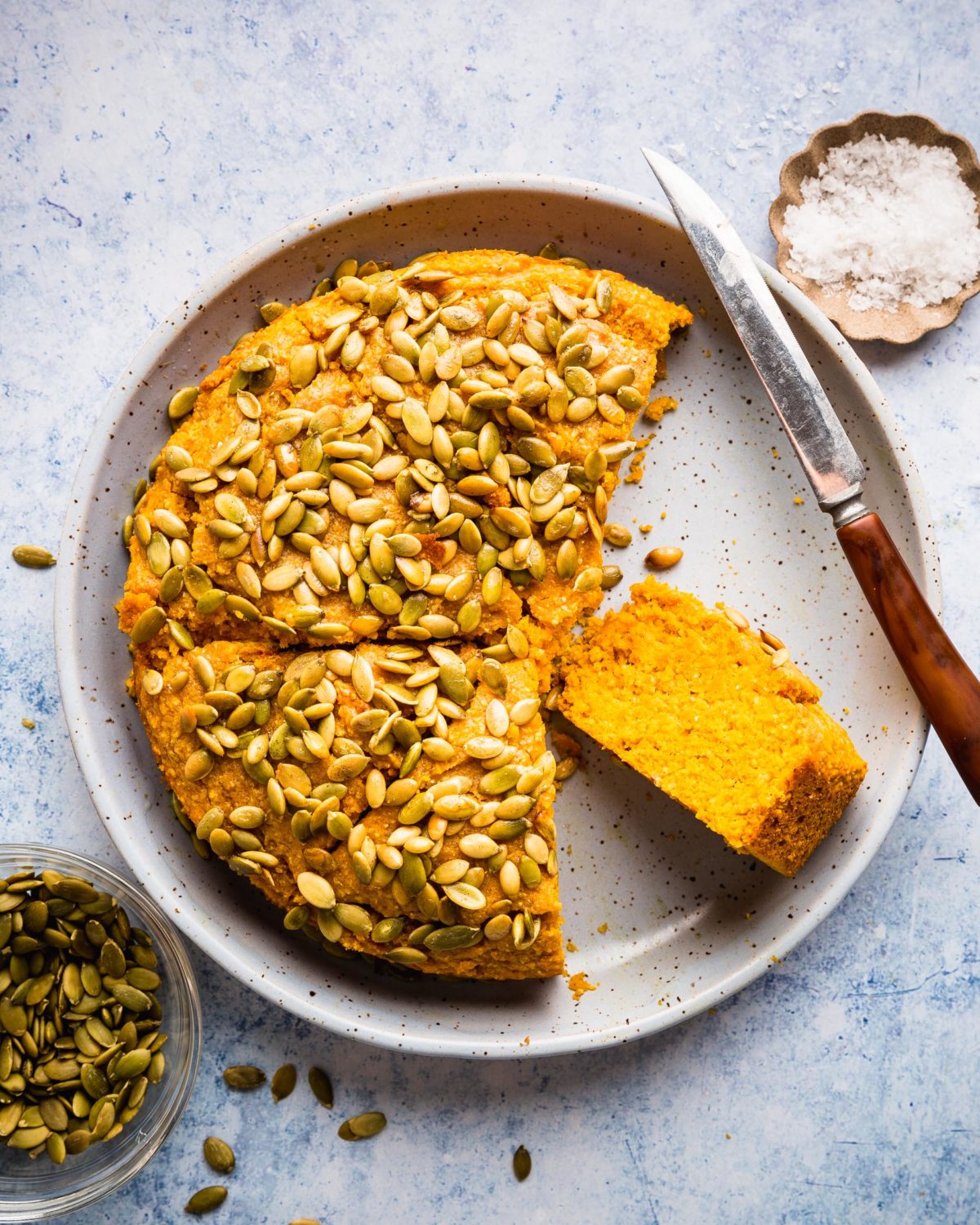 ALL/ Fall/ Side/ Snack/ Thanksgiving/ Winter

This vegetarian Brown Butter Pumpkin Cornbread recipe is the perfect fall or winter side to serve with chili and soup.

Surely you didn’t think I was going to give you a chili recipe this week without also sharing a cornbread recipe?! Don’t get me wrong, I really like chili but there are definitely times when I only make chili as an excuse to make cornbread because you can’t have one without the other.

This cornbread comes together in under 30 minutes so it’s perfect to whip up while your soup or chili is simmering on the stove. What I love about adding pumpkin puree and brown butter to this cornbread is that it adds flavor but the flavor isn’t overpowering. We want the cornbread to be delicious and unique enough on it’s own that you can eat a piece like a muffin but also have a subtle enough flavor that it works well dipped into chili and soups. Another bonus of adding pumpkin is that it keeps the cornbread a little moist so you don’t have to worry about serving dry cornbread.

The pepita / pumpkin seed topping adds an extra crunch element that I really enjoy if you are eating this with just a smear of butter. In order to keep the seeds from burning in the oven, I’ve instead opted to toast these on the stovetop while the cornbread bakes and then brush the cornbread with melted butter when it comes out of the oven to help the seeds stick. I wanted to mention that this method works but it’s not perfect and I still had quite a few seeds fall when I sliced the bread. If you don’t want the seeds potentially falling into your soup or chili then you can skip the topping.

PS Be prepared for LOTS of pumpkin recipes from me this fall. When I was recipe developing my newest cookbook this past spring, I was having trouble finding canned pumpkin (it was right around when the pandemic started and I think grocery stores were just focused on stocking the essentials) so I had to buy it in bulk online which meant I ended up with 20+ cans. I used some for the testing but still have at least a dozen or so cans on hand that I plan to play around with this fall. So yeah – hope you like pumpkin and let me know some of your favorite ways to use pumpkin puree! 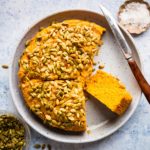 This vegetarian Brown Butter Pumpkin Cornbread recipe is the perfect fall or winter side to serve with chili and soup.

Course: Bread
Cuisine: Vegetarian
Ingredients
For the cornbread:
For the topping:
Instructions

Make sure to tag Vegetarian ‘Ventures on Instagram and use #vegetarianventures when trying this dish out!