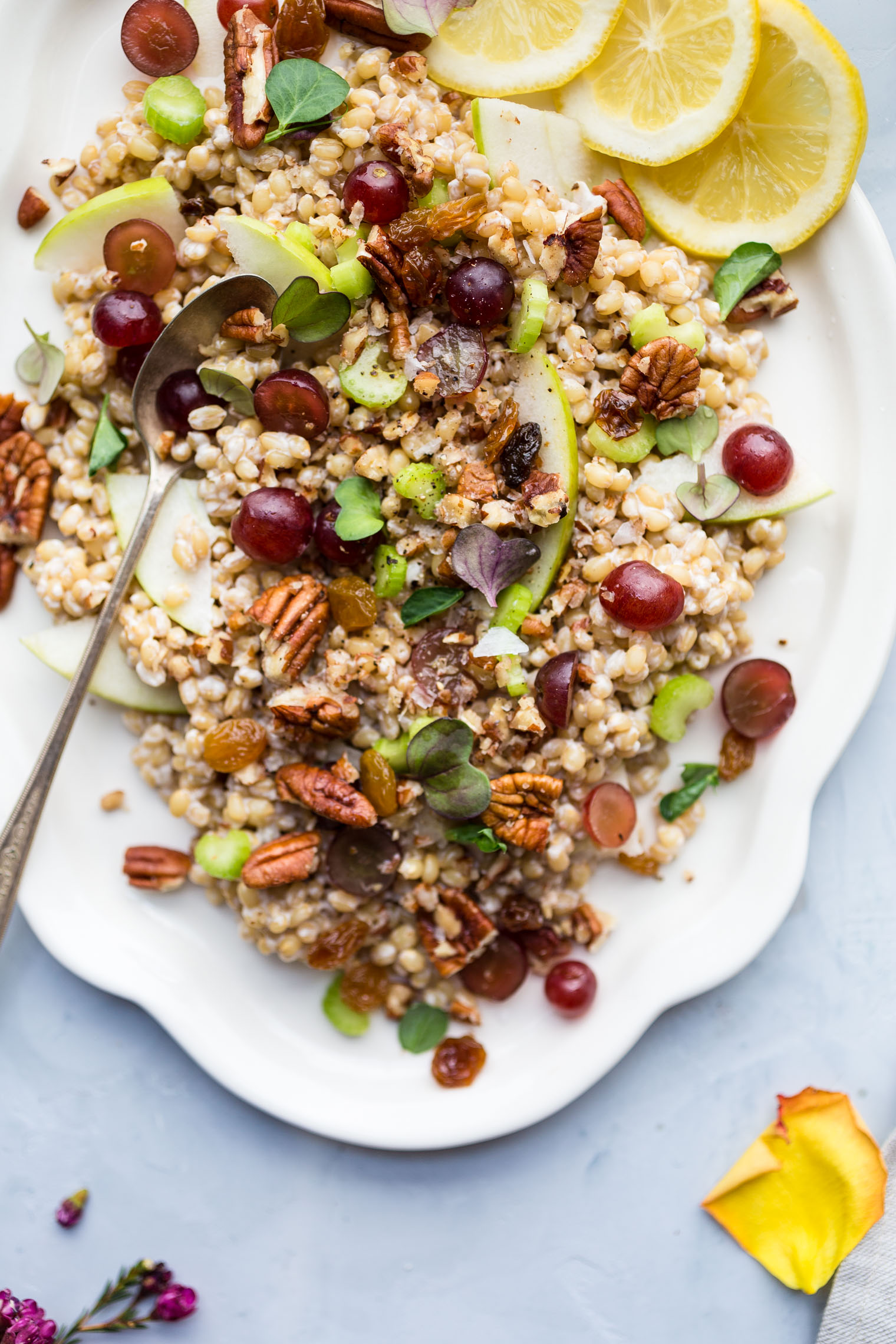 This Vegan Waldorf Wheatberry Salad is the perfect simple recipe for a filling lunch or side at dinner. #Tastelikebetter

I got the idea for this salad over the holidays when I helped Wyatt’s mom make a family feast. I was excited to get into the kitchen and learn the traditional recipes Wyatt grew up with. It didn’t take long before I discovered they were much different than the ones I make in my own kitchen (so much butter, velveeta!, and the likes). I volunteered to whip up the waldorf salad – surely I’d be good at that since veggies are my specialty. I had never actually had a Waldorf salad before but the idea of it sounded delicious – crunchy celery mixed with sweet grapes and sour apples all folded into a creamy dressing. I imagined a tangy yogurt dressing with a hardy grain bringing it altogether but soon realized that the recipe I’d be following actually had mayonnaise for the creamy base and was more of a glorified fruit salad than a hearty grain salad I had imagined. I stuck to the original recipe and the flavors ended up being wonderful (I mean the salad is super famous – you’d hope so!) but I took a mental note to play around with my own version when I got home.

As a quick google scan, I soon discovered I wasn’t the only one to make a healthier version of the dish and I am excited to share my version with you today. It makes a great meal for lunch or as a side for dinner. You can add more greens (such as spinach, lettuce, or kale) to make it more salad-like or just stick to a sprinkle of microgreens on the top. Waldorf salad dressing is just mayonnaise, sugar, lemon juice, and salt. For my fresher dressing, I used Silk’s almond yogurt in this recipe to make it vegan and whisked it with a little bit of lemon juice, salt, and pepper (I found the salad to be sweet enough from the fruit). 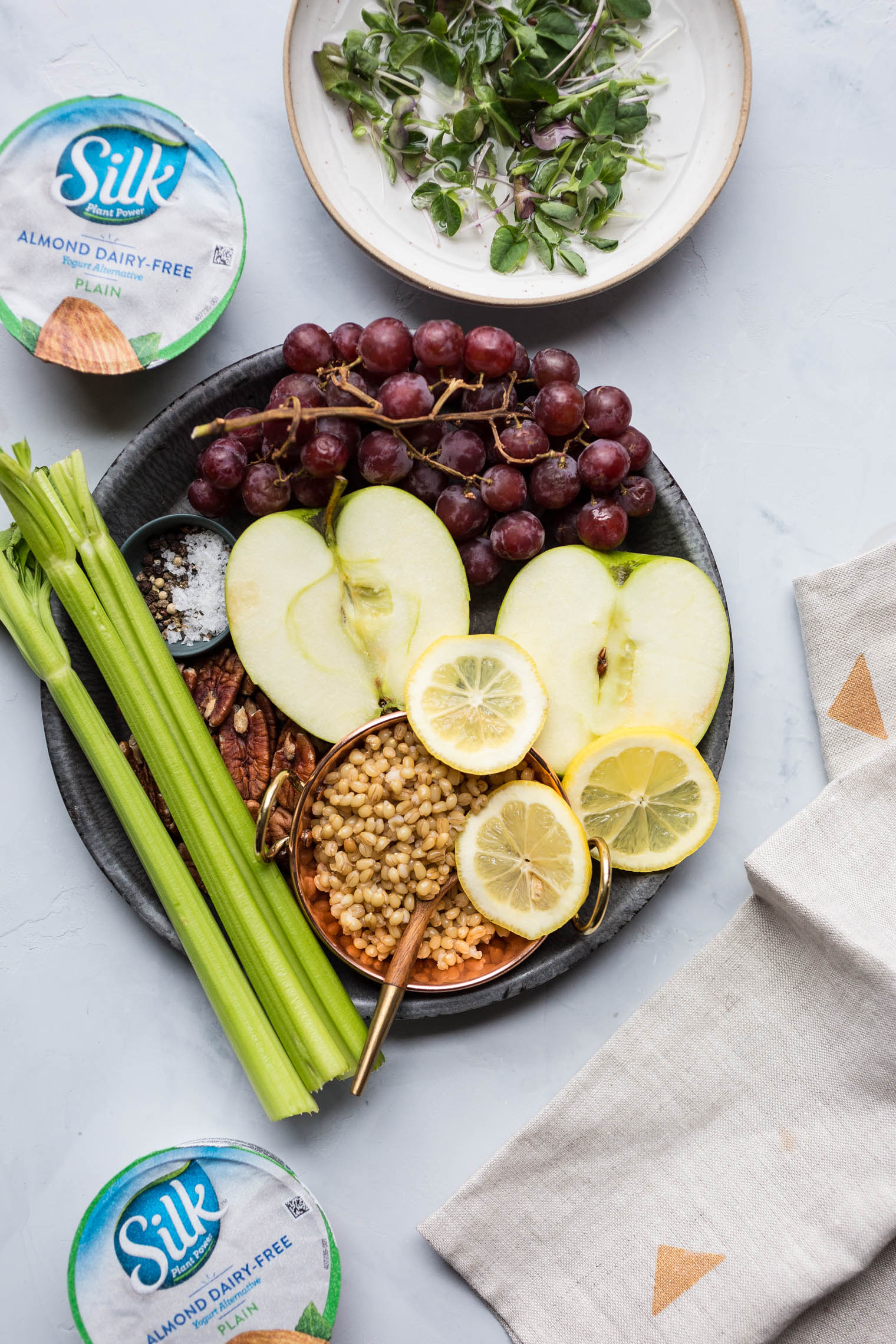 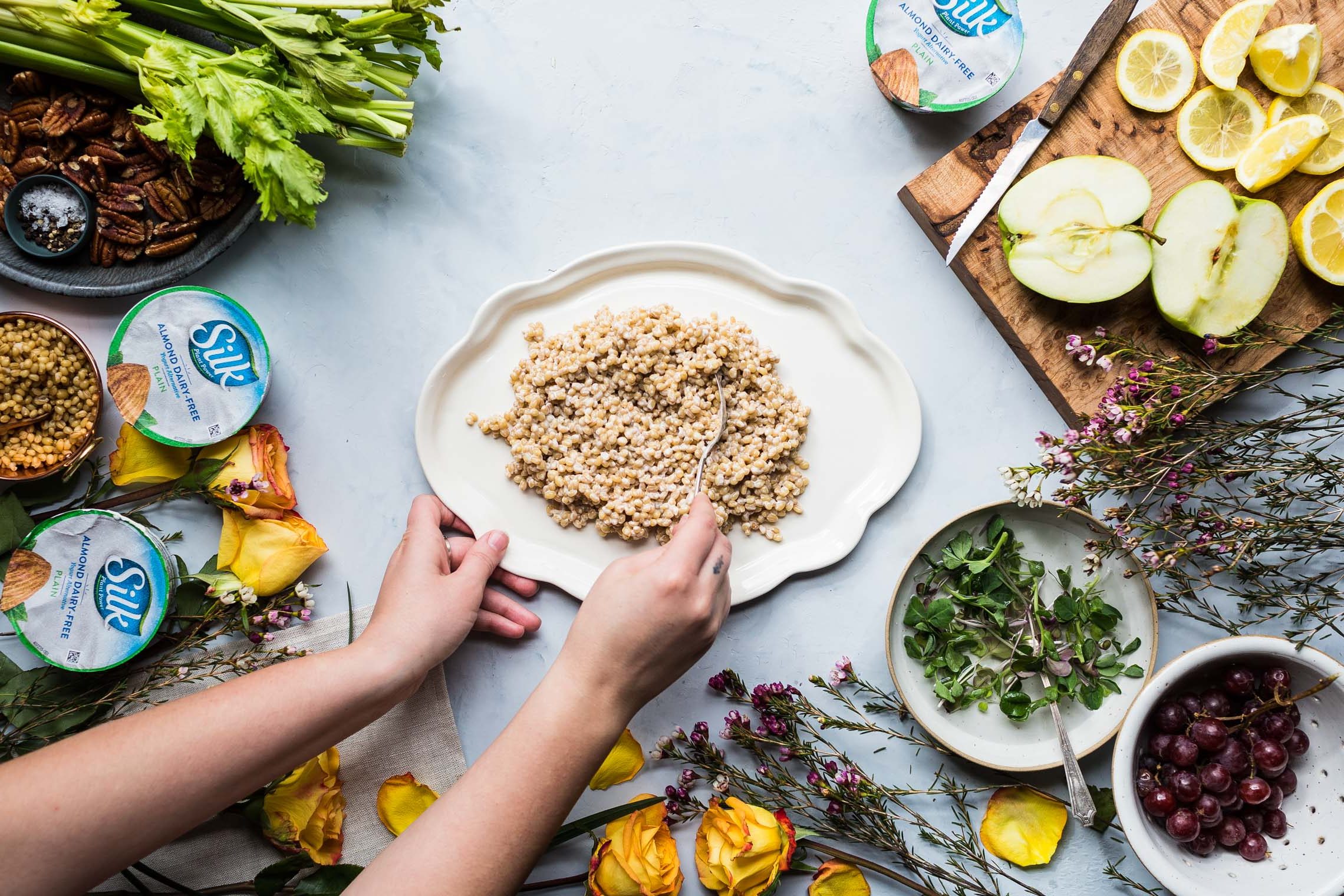 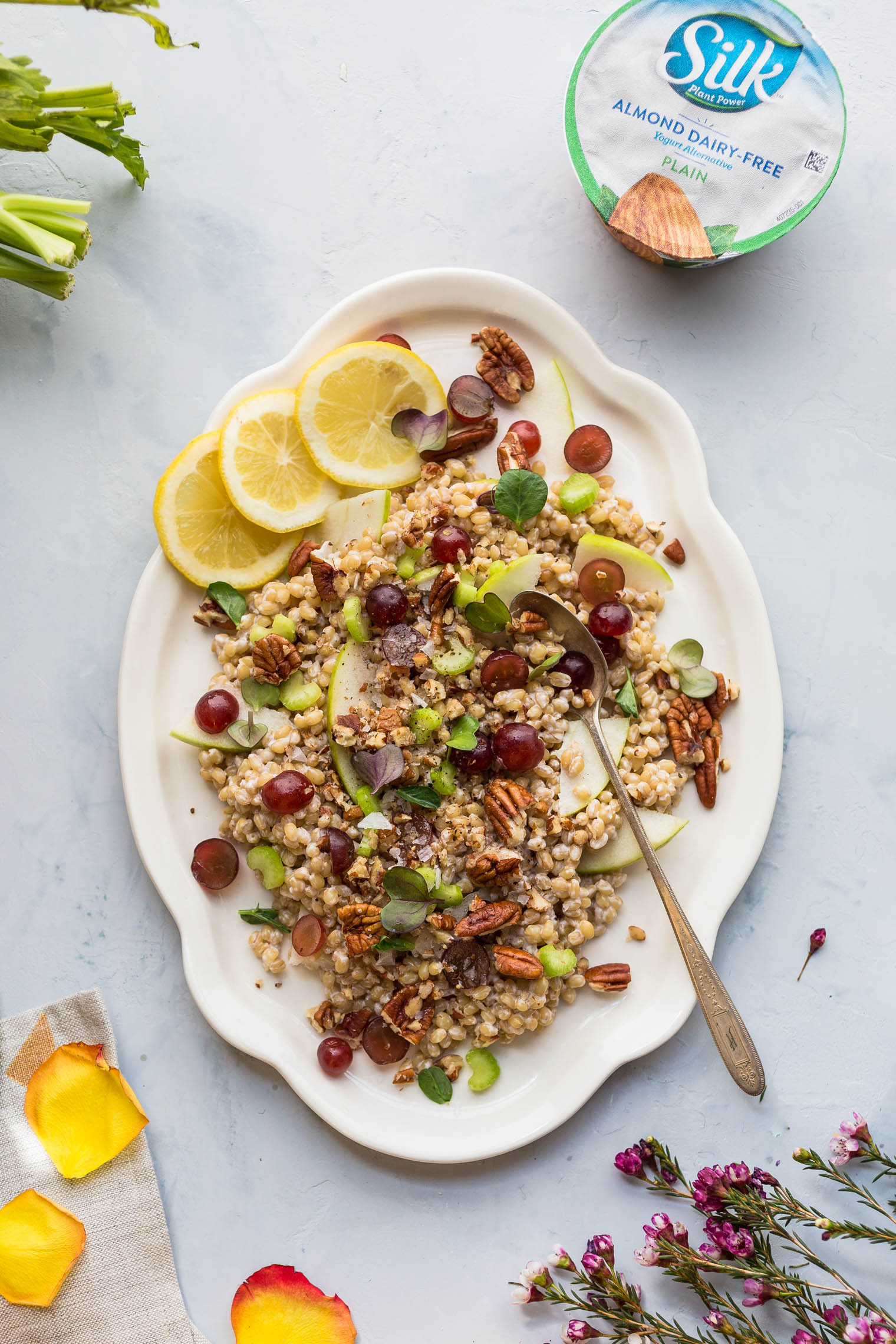 What I love about this super simple Healthy Vegan Waldorf Salad is that it’s lighter than the fare we’ve been indulging in all winter longer but it uses ingredients that can be easily found all year round. I also used Silk’s Almond dairy-free yogurt alternative to create the creamy vegan dressing. I’m pretty excited about this yogurt alternative since I prefer plain yogurt and have had the hardest time finding a plain vegan version in the past.

I’ve made this recipe a few times now and have discovered it’s great with or without golden raisins. Waldorf salads are traditionally made with walnuts but I prefer the buttery texture of pecans and found they work beautifully in this dish. Also, having trouble finding where to buy wheatberries? I have had trouble finding wheatberries in the grocery store in the past but I’ve find that you can usually find them in the bulk section of most grocery stores. The ones I used in this post are from Nuts.com which has several varieties available. 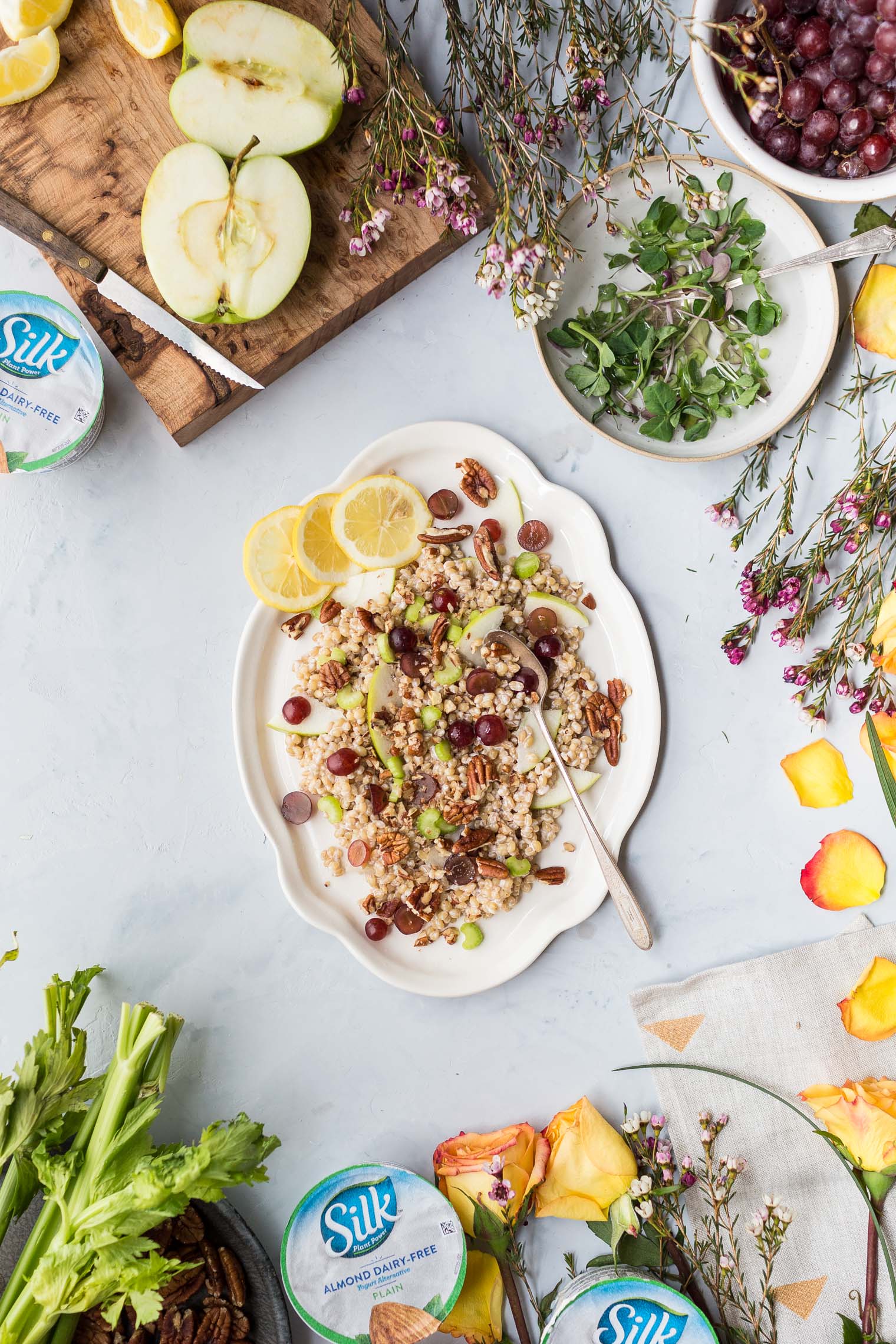 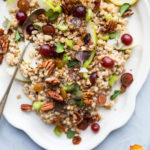 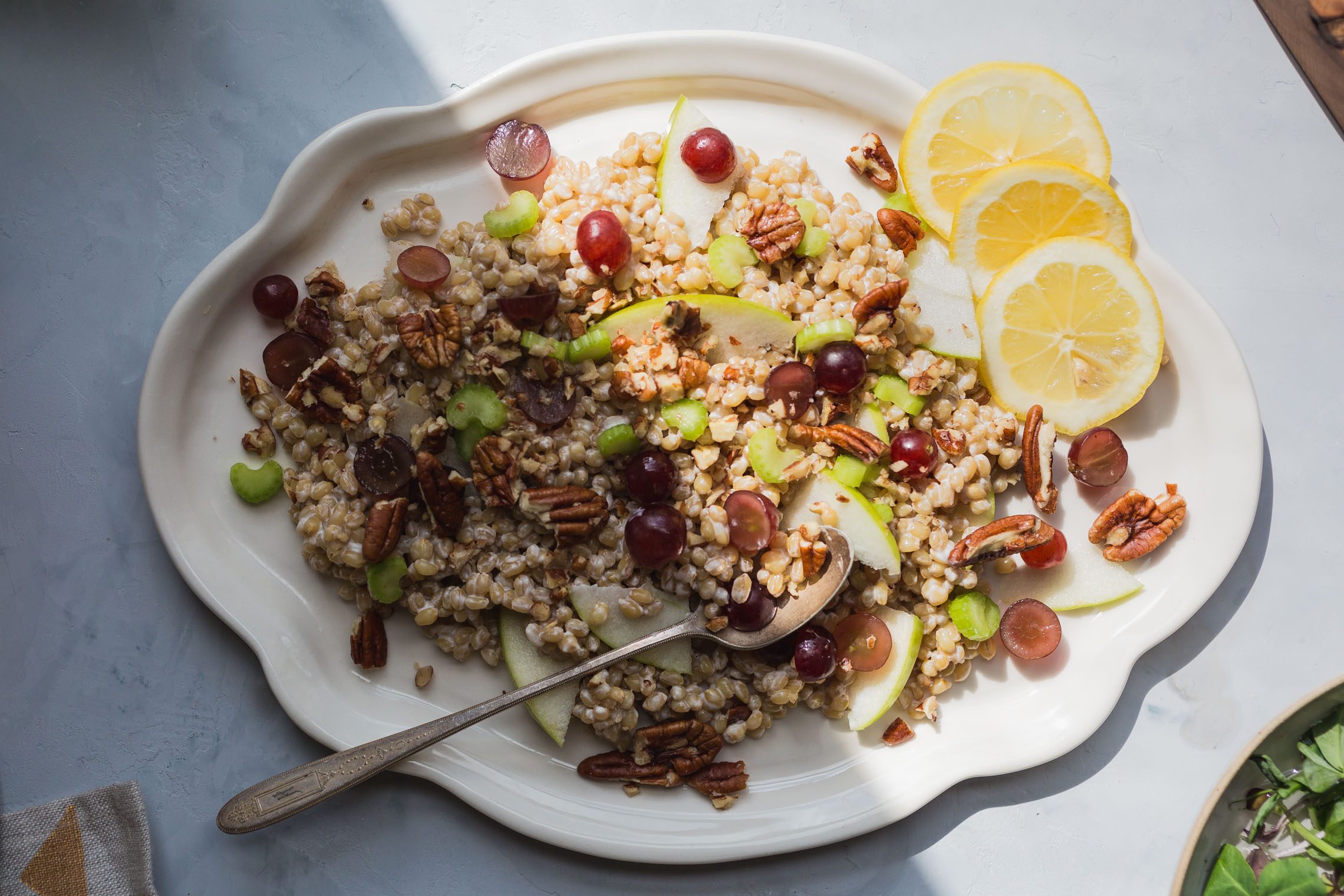 This is a sponsored conversation written by me on behalf of Silk. The opinions and text are all mine.