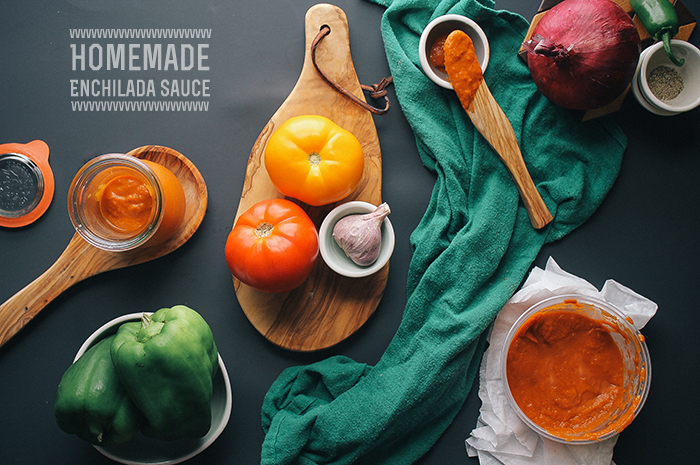 ALL/ Sauce/ Side/ Vegan

This is how enchilada sauce is supposed to taste! Fresh and spicy. A little tomatoey, peppery, and full of heat (if you like spicy). Oh, and it’s vegan!

I don’t know about you, but the term ‘enchilada sauce’ doesn’t exactly conjure up fresh and summery images. It mostly makes me think of that dark, musky aisle in the already dingy international grocery store where you have to brush the dust off the can before picking it up and throwing it into your cart.

This off-putting imagery doesn’t happen with all Mexican food. In fact, tamales conjure up wonderful memories of watching my step-mother whipping up several dozen in our kitchen when I was little. And tacos make me think of fresh grilled pineapple and strong margaritas. But I don’t know – there’s something about that enchilada sauce…something about the old-fashioned design on the cans that make me think it’s been on the shelf since that art was in style in the 80s (maybe even 70s?).

That was until I decided to start making my own. And everything changed in the enchilada world for me. It doesn’t taste like the enchilada sauce from the can…it tastes so much fresher. And though it’s not the flavor your tongue is expecting at first, you will glow with the realization that this is how enchilada sauce is supposed to taste. Fresh and spicy. A little tomatoey, peppery, and full of heat. Of course, the amount of heat you’d like to create is up to you.

This enchilada sauce from scratch is completely from scratch. No canned anything in this recipe — except the tomato paste. Does that count?

How to Make Homemade Enchilada Sauce

This red enchilada sauce recipe isn’t challenging, but there are lots of little steps — mostly simple ways to remove the outer peels from the tomatoes and peppers to create a creamier sauce. Don’t feel discouraged by the wordy directions below, it won’t take long and you’ll have deliciously fresh enchilada sauce in no time!

How Long Does Enchilada Sauce Last?

This easy homemade enchilada sauce will last up to 4 days in the fridge.

Can I Freeze Enchilada Sauce?

Absolutely! Let it cool completely, then freeze up to 3 months. To thaw, reheat from frozen in a saucepan or place in your fridge overnight.

Different peppers will result in different spice levels, so go ahead and get acquainted with what peppers work for you (okay, so maybe that link is a little over-kill but it’s sort of fun to realize that all these peppers exist.)

Any variety of tomato will work in this recipe. Just be sure to cut an X on the bottom so the peels come off easily after being blanched.

For much spicier homemade red enchilada sauce, leave the ribs and seeds in the jalapeños after peeling them. 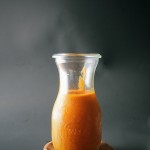 This is how enchilada sauce is supposed to taste! Fresh and spicy. A little tomatoey, peppery, and full of heat (if you like spicy). Oh, and it's vegan!