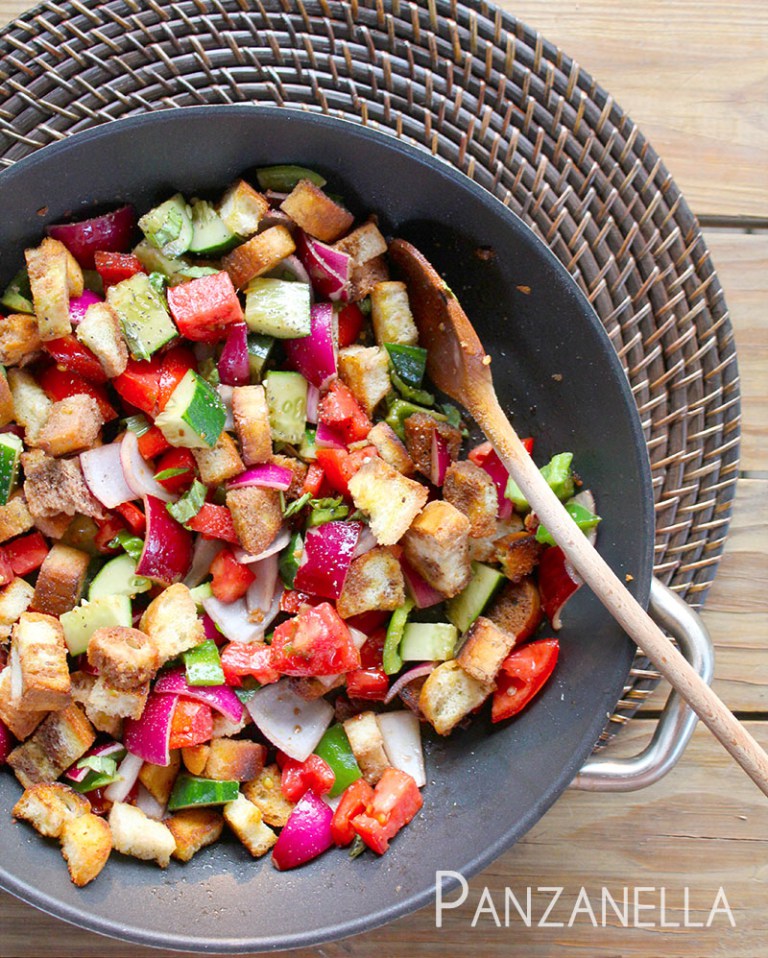 ALL/ Appetizer/ Bread/ Side/ Vegan

Okay, so I feel a bit behind the times posting a {gasp} tomato-themed recipe while the rest of the blog sphere is bustling with pumpkin flavored baked goods and spiced ciders. I guess this probably tells a lot about my character. I spent all summer dragging my feet and then the crisp, fall-feeling air kicked in last week was a slap in the face. It was a reminder that there are still plenty of summer produce recipes I wanted to conquer. So…here we are…scrambling at the last minute trying to fit every last possible heirloom tomato, sliver of basil, and piece of zucchini bread into my diet before the first frost comes. And thus, I am asking you to stick with me…give me THIS week (and maybe weekend) to get summer out of my system and I promise I will start fresh next week with pumpkin infused everything. Cool? Cool.

Anyhow, the main reason I probably took so long to make these recipe was coming to terms with using my day old bread in a salad. Don’t get me wrong….I loooove salads but old bread is meant for french toast. Everyone knows that! And the struggle between making a salad and french toast…was well not really a struggle for most of the summer. Sorry arugula but cinnamon and butter win every time. Well…every time up until now. After making this last week, I wish I had been more open to sharing my stale bread all summer long…maybe stocking up on twice as much bread to distribute evenly between sweet and savory. We could have come to some compromise had I known this was going to be pretty much the best salad ever to exist.

This recipe reminds me of a salad form of bruschetta (probably for good reason…you smart smart Italian chefs!). This is a huge relief for me because I LOVE the flavors of bruschetta but am not allowed to make it myself. I can’t make it myself because my old roommate and very very good friend makes the best bruschetta ever to exist. And this is probably due to the fact that she lived in Italy for a short period (and Belgium and South Africa and Jordan…sheesh, putting my cultural experiences to shame). Sooo… it’s awesome having a friend who can make pretty much the best summer dish ever but it means that my attempts are just pointless. And thus, this is a great alternative to trying to get my bruschetta fix without having to actually compete with Ella’s bruschetta.

To make the dressing: whisk all the ingredient together in a small bowl and set aside.

Heat a tablespoon of olive oil in a skillet over medium. Add the bread and toss until it is completely coated. Saute until browned and crispy on all sides. Add salt and toss to coat. Remove from heat.

In a large salad bowl, combine the pepper, onion, cucumber, tomatoes, capers, and toasted bread. Fold in the capers and salad dressing right before serving.

How easy was that?